If your home is energy efficient, it will soon be in good company: 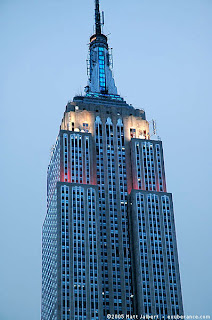 Yes, what was once the tallest building in the world is getting a tune-up.

The Empire State Building was built in 1931, when energy costs were not the concern that they are now. The building was not designed to conserve energy. For example, the space behind the radiators was not insulated, meaning that the building leaks lots of heat.

All that will soon change. Insulation will be installed behind the radiators, the windows will be improved, and other areas, mostly involving lighting and heating / cooling, will be seeing some fix-ups.

All told, the repairs are expected to reduce energy use by as much as 38% per year, saving $4.4 million per year. The project is expected to pay for itself three years after completion. Anthony Malkin, the President of the firm that supervises the building, wants to show the financial benefits of performance retrofits (quote from the New York Times):

After the retrofit is finished, the building is expected to be among the top 10% of ENERGY STAR office buildings.

For more information on the changes they are making to this New York City landmark, and why, click here
Posted by North Carolina Energy Efficiency Alliance at 10:31 AM