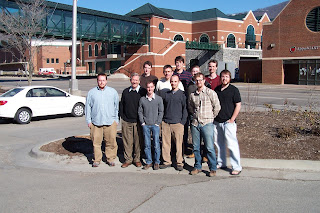 Tucked away in two small offices in Katherine Harper Hall, 10 or so men are working to educate the public.

Yet unlike most professors on Appalachian State University’s campus, their lesson plans do not revolve around history or mathematics, but center on another increasingly important subject—sustainability.
These men work for and operate the North Carolina Energy Efficiency Alliance, a non-profit organization that was created in August 2010 to promote and educate green building.
“What we’re attempting to do is increase the number of ENERGY STAR homes that are in the market place and to educate the buying consumer about the advantages of purchasing ENERGY STAR homes,” said Chuck Perry, the alliance’s program director.
An ENERGY STAR-rated home is one that meets the strict guidelines for energy efficiency set by the U.S. Environmental Protection Agency (EPA).
These homes are at least 15 percent more energy efficient than homes built to the 2004 International Residential Code (IRC), and include additional energy-saving features that typically make them 20 to 30 percent more efficient than standard homes, according to energystar.gov.
With the alliance’s main tangible goal to increase the number of energy efficient homes in the state, they host builder training events as well as home shows to increase awareness about sustainable building.
“We just had a busy week working in a number of different capacities,” said Nicholas Hurst, assistant program director with the alliance. “We organized a summit that was held in Raleigh, where we had about 60 folks from various industries,” Hurst said. “These folks included home builders, home energy raters, realtors, appraisers, lenders, and green building allies in the industries.”
The alliance wants to have about 3,000 ENERGY STAR homes built in North Carolina over the course of their project. So far, the alliance has 1,500 to 2,000 homes currently being built and 200 close to being completed.
“We are on target to reach our goal or that tangible number, but to quantify the success of the project might take a couple years even after the project’s over to see what the market change has been,” said Landon Williams, assistant program director with the alliance.
The alliance is part of a partnership that includes Advanced Energy, Southern Energy Management and the N.C. Solar Center.
With the partner organization’s workers included, the alliance is made up of about 20 workers, including four graduate assistants from Appalachian.
Bill Pfleger is a graduate assistant in the department of technology.
Pfleger is currently operating a quantification study, where the alliance will investigate a sample of ENERGY STAR qualified homes in Raleigh and compare them to appraised similar homes that don’t have the ENERGY STAR rating.
“We’re hoping to provide real numbers to builders and say there is a competitive financial advantage and return on your investment in doing this,” Pfleger said. “It’s not just that you’re building green, there’s also a motive financially to do this.”
Currently, only one out of four houses are ENERGY STAR-qualified, and Perry said the alliance’s efforts are pushing the consumer demand, and thus, “creating jobs for students.”
“And so as we go to educate builders, we’re going with the Appalachian State University hat on,” Perry said. “We’re showing them pictures, techniques, and identifying processes that will make their houses better, and they associate that with the university and these are the people that are going to hire students out of this university to go to work.”
Anyone interested in the alliance’s efforts can check them out on their website at ncenergystar.org. Also the alliance also recommends visiting their Facebook page and blog.
Posted by North Carolina Energy Efficiency Alliance at 8:17 AM