Since the 1980s, energy efficiency appliance standards have been saving consumers money and creating jobs throughout the United States. These standards translate into savings when new, energy-efficient equipment is purchased, reducing utility bills for consumers and businesses. This in turn creates a net increase in jobs and wages due to the fact that as consumers and businesses shift spending away from energy utilities—an industry sector with relatively few jobs per dollar of revenue—they are more likely to spend money on improvements and services, sectors that are more job-intensive.
Meanwhile these standards protect the environment by reducing not only the need for new power plants, but overall power plant emissions as well.

Due to their track record of success, federal energy efficiency standards have been enacted with bipartisan support in 1987, 1988, 1992, 2005, and 2007. The standards prohibit the production and import of energy-consuming products less efficient than the minimum requirements, keeping low-quality appliances—whose competitive sticker prices conceal their high operating costs—out of the marketplace, while still providing consumers with a broad array of product sizes and features.

Standards, however, need periodic updates in stringency to keep pace with evolving technological capabilities, and new products may require additional federal standards as technologies advance. Absent congressional updates, existing standards mandate that federal appliance standards be periodically revised in Department of Energy rulemakings. Therefore, we estimated savings for those standards, already in law, which the Department of Energy will issue and complete by 2013. We also looked at new consensus standards for HVAC systems, many standards currently covering home appliances, and some previously overlooked areas that are a part of pending legislation, the Implementation of National Consensus Appliance Agreements Act of 2011.

A report ACEEE released in January found that standards already in place created about 340,000 jobs across the nation in 2010. This number includes jobs that standards created in earlier years and were maintained in 2010. Current and future standards will create about 380,000 jobs by the year 2030, an increase of 40,000 jobs relative to 2010. See the map here: 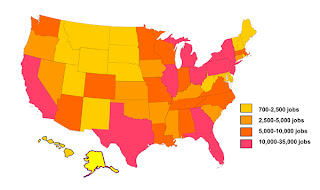 Net Jobs from Appliance and Equipment Standards in 2010 by State

As shown in the map, appliance standards added jobs to each state and the District of Columbia in 2010, with the number of jobs roughly correlating with population for most states. Data on energy consumption, prices, employment, and energy expenditures was used to apportion our national energy, energy bill, and jobs estimates to each state.

While previous standards have yielded savings and created jobs, we shouldn’t rest on our laurels just yet. INCAAA 2011, introduced by Senators Jeff Bingaman (D-NM) and Lisa Murkowski (R-AK), would codify appliance standards already agreed upon by the appliance manufacturing community, efficiency advocates, states, and consumer groups. It contains improved standards for HVAC systems, including furnaces, heat pumps, and air conditioners, which take advantage of the latest technologies and efficiency potential. It also would improve standards for many currently covered home appliances, such as refrigerators, freezers, clothes washers, dryers, and dishwashers, to maximize cost-effective efficiency savings. In addition, it would create standards for some previously overlooked areas, including inefficient types of outdoor lighting.

The potential savings created by these standards could be tremendous. ACEEE estimates that INCAAA would, by 2030, save the United States about 850 trillion Btus of energy each year, which is roughly the energy use of 4.6 million homes. That’s more energy than was used by the entire state of Connecticut or West Virginia in 2008. According to these estimates, the net economic savings to consumers would be $43 billion through 2030. And as we’ve discovered, these savings are likely to save consumers even more money and create more jobs, all while reducing emissions and the need to create more power plants.
Appliance standards have an almost 30-year history of success and bipartisan support, and INCAAA presents an opportunity for Congress to leverage this impressive track record. Passing this legislation would achieve real savings for taxpayers while increasing business competitiveness—a winning combination in today’s economy.
Posted by North Carolina Energy Efficiency Alliance at 1:50 PM